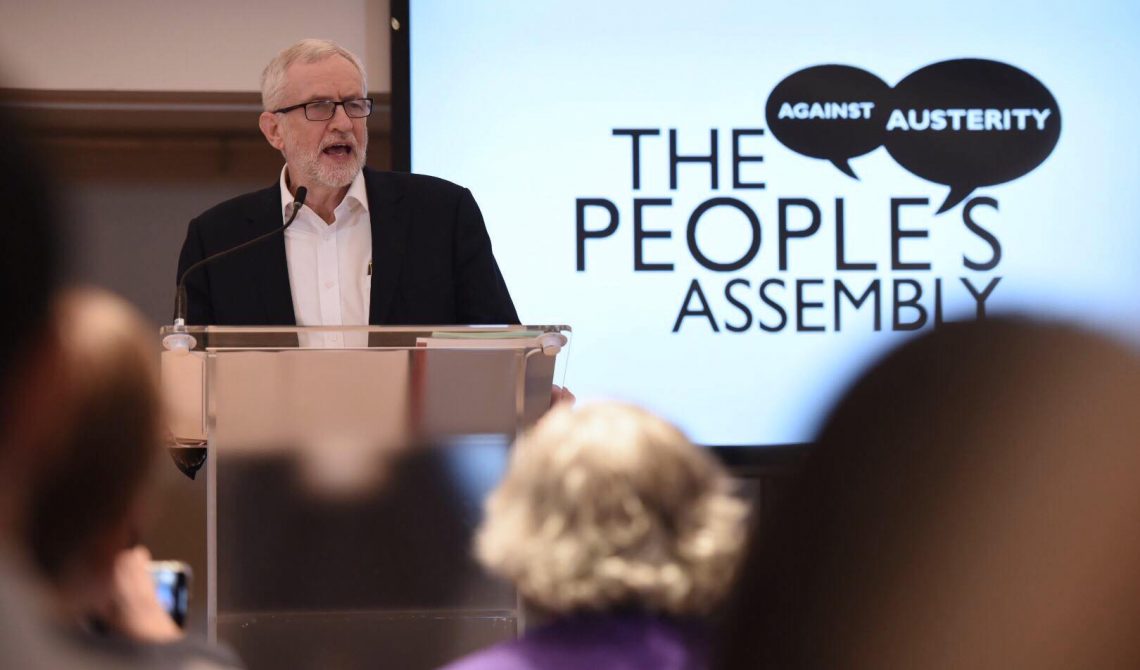 The General election result was a big blow for the left, but it presents us with an unprecedented opportunity to organise – argues Jim Scott as he reflects upon a recent meeting between Jeremy Corbyn and People’s Assembly activists

Last week, on budget day, a dozen or so People’s Assembly delegates from around Britain joined Jeremy Corbyn for a sit-down meeting in his office in Parliament, I was very pleased to be one of them. The meeting was followed by the Big National Watch Party organised by the People’s Assembly which was pitched as a response to the Tory budget. Jeremy Corbyn also joined the panel of this second event.

On a personal note, it was a great privilege to be invited to such an intimate meeting with Jeremy. Myself and fellow activist Stevie Jones travelled down from Pembrokeshire where we have been very active in recent years, organising several anti-austerity rallies, demos and campaigns in the County. Even in such a rural setting, an ever-growing group of us has built a very strong activist collective, with the People’s Assembly movement being the perfect vehicle to do so. Perhaps testament to this was when the crowdfunder we set up to fund our train tickets to London for the meeting was fully funded in a matter of two days, all by local members and supporters!

We all gathered near Westminster Tube Station and following a bit of a holdup while we all passed through Parliament’s elaborate ‘airport-style’ security we were eventually all sat down in a room with Jeremy himself, with just over an hour to get down to business and share our thoughts on the current political situation we find ourselves in, how we got here and where we’re going next!

Following a very warm and characteristically personable introduction from Jeremy, the first big topic to arise was surrounding the issue of Labour councils administering Tory cuts and the flack they inevitably receive as a result when services collapse. It was suggested that if enough Labour councils had joined forces and agreed collectively to refuse to accept the austerity budgets of the last ten years then perhaps the Tories’ austerity U-turn would have been forced sooner than it has. This is certainly something that many of us have been campaigning on here in Wales, by applying pressure on Labour- and Plaid Cymru-run Councils to refuse austerity budgets. I was also able to point out that here in Wales we are in the absurd situation where a grossly underfunded devolved Welsh Labour Government is finding itself increasingly under fire from the general public for closing, for example, hospital services. The situation in Wales has become so ludicrous that there are even ‘rosette-wearing’ Tories involved in hospital campaigns! These people are effectively campaigning against their own neoliberal values—yet the Welsh budget is administered directly by the Tories through the Welsh Office anyway!

The consensus of the meeting then delivered broad agreement that 40 years of neoliberal ideology pervading every level of government had led to a situation where even our expectation of decent public services has been gradually eroded over time, with Jeremy raising the question: has the time now come for an end to constant campaigns to save a service here, or protect against a closure there—and instead seize on the gains we have made, and demand fully-funded services everywhere? Jeremy then became quite engaged with our suggestion that we should push for the Labour Party to advise ruling Labour council groups to work actively with local Assemblies, and set “People’s Budgets”, referring back to this idea later in the evening.

We also discussed union engagement around Britain, comrades recalling the past days of packed union meetings where now there is far less active engagement. Again, 40 years of neoliberal economics, successive and regressive anti-union legislation, the gig economy and other factors have led to disengagement with the concept of collectivising within a unionised workforce, all of which needs to be addressed and redressed—especially as workers find their rights further-eroded within gig economies, zero-hours contracts and privatised industries.

The conversation then turned towards reflection upon resent years since the 2017 general election, and where things may have gone awry for the prospect and potential hope many of us had invested in the idea that electoral politics could play a part in saving us from the current Tory stranglehold on our society. Speaking as an activist who has relied heavily on the use of social media as a campaign tool and as a means to organise, I tried to paint a picture which would highlight how the political landscape had shifted so drastically on social media platforms over the last few years. I explained that in 2017 the experience had been phenomenal, and that I had witnessed nothing short of a ‘tsunami of socialism’ on Facebook in the run up to the 2017 general election. This sudden, mass political engagement caught the establishment completely off-guard, as did the movement that had amassed behind Corbynism and which very nearly led to toppling the Tories in 2017—but this gave the establishment right, both outside and inside The Labour Party, the time they needed to regroup and retaliate, which they did with a vengeance! We all witnessed the smear campaigns and subsequent retreats that Labour were forced to concede over that period as well as the squalid techniques the establishment media employed in order to exploit any divisions they could find within the Labour Party. Jeremy joked that he had “been very busy” and reportedly even “been a spy” according to some right wing media outlets!

Importantly, vast sums of dark money were poured into Facebook and other platforms: we simply cannot underestimate the impact that had. We know that Cambridge Analytica-style tactics were used to limit the reach of the left and magnify the message of the right. With nigh-on limitless access to money and resources, we know that the right used dark companies to employ tactics such as targeted advertising, illegal usage of personal data and a raft of algorithms and tech in order to target and influence key marginals. Our response to all of this, as I reiterated in the meeting with Jeremy, is that the People’s Assembly and the broader left is going to need some pretty innovative resource-sourcing mechanisms in place if we want to properly resource the left and bring in far greater access to resources for our movement, a movement which, let’s face it, cannot rely on electoral politics for salvation, and must inevitably and with focus move onto the streets in the coming months and years in order to achieve our objectives.

In this vein, Jeremy closed the meeting with some very encouraging words to the effect that “he is not going anywhere,” and will continue to campaign alongside us, as we fight for change, social justice and a permanent end to austerity. With Jeremy even promising some comrades personally that he will attend upcoming events to be held by their local People’s Assembly groups.

A few obligatory JC selfies later and a far more frictionless exit from Parliament than our entrance had been, and we made our way over to Westminster Central Hall for the Panel event where Jeremy would also speak.

The panel was chaired by Steve Turner – Ass. General Secretary, Unite the Union, and comprised of Jeremy Corbyn; Faiza Shaheen, economist and Director of CLASS; and Sonia Adesara, NHS Doctor.

Streamed live to Facebook, The Big National Watch Party was subsequently viewed by 124,000 people and climbing. If you missed it the video is available to watch in full here.

You will see for yourself Jeremy’s speech and the discussions that followed in the video so I won’t try to cover all that here—but I would like to highlight just a few points and themes that I found particularly pertinent myself, as we look to where we are going next as a movement.

Which leads me on to my final point:

Resources for the left!

Yes, the Tories may have an endless supply of money, but they will never have what we have. What we have is a network of activists spanning every inch of Britain; we are passionate and driven people who are embedded in our local communities and determined to create change. We understand solidarity because we so passionately believe in it, and we are committed to our values to create a better world with every fibre of our bodies.

This is an opportunity like never before to truly pool our collective resources and create groundbreaking and innovative ways of sourcing, sharing and distributing these resources throughout our movement. Resources doesn’t just mean money either, although of course we need more money too. Quite the opposite: resources means every single skill, action or attribute we have access to or can offer.

We should create a national resource base to include almost anything from a web designer or public speaker to flyer templates, Facebook click warriors or badge makers; literally anything can be seen as a resource, including our access to the time we need to organise or just plain hard cash. We should create a bespoke #ResourceTheLeft App dedicated to this so that all members, supporters, affiliates and PA groups can access and share the vast resources we have between us. This could work on so many levels, but would importantly build on existing solidarity between groups and activists both at local and national level. Most importantly, a campaign drive or initiative like this which would zero in and focus on ‘resourcing the left’ would in itself bump the topic of ‘resources’ firmly up the agenda, and place this topic firmly on the radars of key people, unions and organisations. Resourcing the left needs to become a project in itself that all of us can get stuck in to. Essentially it would become a vehicle in itself! We are already a very resourceful bunch after all, and we know that there are many passionate people out there with a thousand skills and talents who want to contribute, so let’s get organised, and prepare for activism twenty-first-century style!

Mass mobilisation of the extra-Parliamentary left has got to become our key priority—to achieve that we will need to up our game by building on the phenomenal movement that we’ve built over the last few years. As we organise and take to the streets in increasing numbers, we help to further the objectives of our unions & campaign groups, and this is why it’s not only vital, but simple logical that those very organisations direct as many resources as they possibly can to the People’s Assembly and all campaigns who, by default, are opening the political space they want to occupy. The message is simple: The People’s Assembly is the most well placed organization in Britain right now to take the fight to the establishment—in doing so we further the key objectives of those organisations who support us—so let’s make sure that they make sure we are fully resourced as a matter of priority and therefore in the strongest possible position to do so!

Jeremy told us on Wednesday that the local People’s Assembly groups all around Britain were reminiscent to him of the ‘Councils of Action’ formed in the 1920’s. These Councils of Action ultimately paved the way for the general strike of 1926, let’s keep growing our movement and moving forward with that thought in mind.