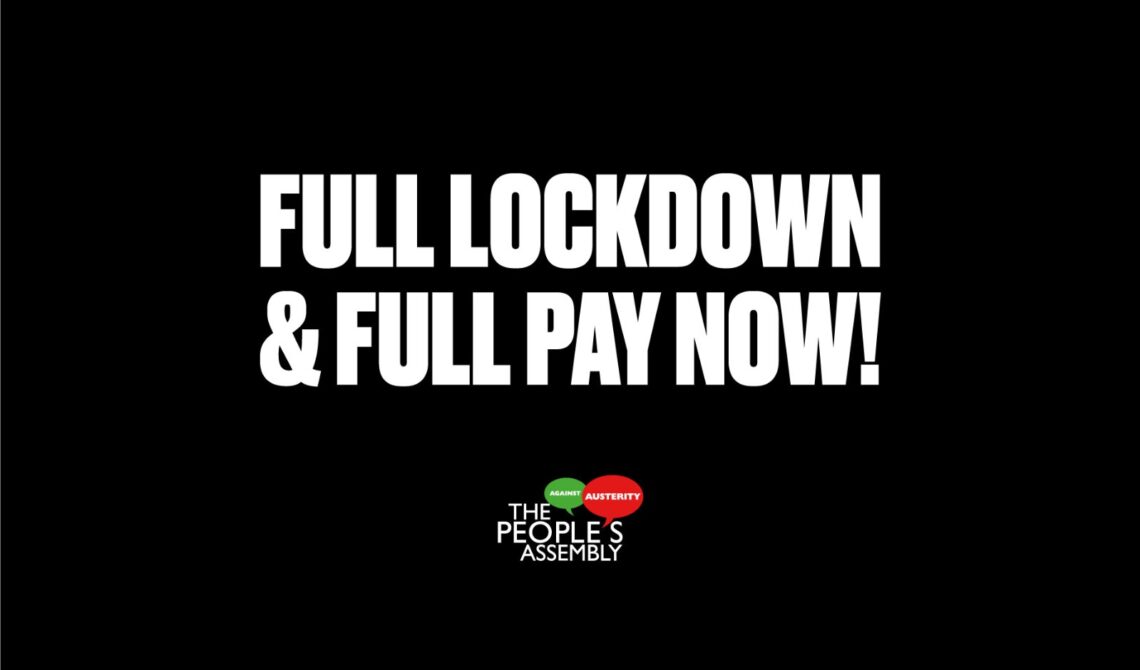 Government policy isn’t working, either in terms of protecting lives or protecting livelihoods. Experience shows that there should be a complete lockdown to combat the pandemic. This means all non-essential work stopped, schools closed and all possible higher education moved online.  There should also be proper compensation for workers, who should receive 100% of their pay, not the 80% currently (or none at all for some freelance and other workers).

The public health crisis caused by the Covid-19 pandemic has led to an economic crisis.  There is no possibility of ‘saving the economy’ while a pandemic is raging.  You cannot force people to go to pubs, cinemas or restaurants in a pandemic.  It is not the restrictions that are killing these businesses and workers’ jobs.  It is the pandemic itself.

There is too no ‘trade-off’ between combatting the virus and protecting the economy, as frequently claimed.  This government’s disastrous record demonstrates that.  The UK has one of the worst death tolls per capita of any large country in the world, and the worst total in Europe.  It has also the worst economic performance of any major Western economy, as the Office of National Statistics has recently shown.

In contrast, the countries that have effectively eliminated the virus, Australia, China, New Zealand and Viet Nam are also the economies that will grow the strongest this year, according to IMF forecasts.

There is a public health imperative to combining full lockdown with full pay for all furloughed workers.  Many workers are already in poverty even at 100% of their usual pay.  56% of those in poverty before the pandemic were in work.  This means millions were already poor when being paid their full wages.  Reducing them to 80% increases the probability of outright destitution.

As a result, the government-ordered pay cut also compels many to ignore lockdown restrictions, even when they know they are putting themselves and their loved ones at risk.  All of us are put at risk.  It is also completely unjustifiable to cut the wages of those on the National Minimum Wage, as this government is doing.

‘There is no money left’

The main objection to 100% pay for all furloughed workers is cost.  But the additional outlay for full pay is tiny in comparison to other levels of expenditure, including a £300 billion bank loan guarantee scheme and the initial £110 billion support for businesses (via the Job Retention Scheme, the bounce back loan scheme, the business rates holiday and other measures).

The estimated cost of the initial furlough scheme which ran from March to the beginning of October was £40 billion.  Using simple maths, the total cost of a scheme offering 100% of wages is only marginally more at £50 billion.

The National Institute for Economic and Social Research (NIESR) estimates that the scheme is self-funding.  This is because over the long-term it helps to preserve jobs and all the tax revenues that they generate. Furlough payments are like an insurance policy, helping to ensure the continuation of that future tax revenue stream dependent on jobs.

So, the increase to 100% furlough pay is easily affordable.

The whole labour movement should argue for 100% of pay in a complete lockdown.  Full lockdown and full pay now!