Tory MPs sparked a new wave of anger amongst the public by voting to deprive our children of a healthy free meal over the half term holidays. As a result of this governments failings so many people have faced horrendous poverty during this pandemic. Poverty that could have been avoided had the government acted sooner with an adequate amount of support for those impacted by the pandemic crisis.

The inadequate Universal credit system is not helping those in need and people are falling through the gaps. The support offered has been scarce from the start and sets to be reduced in the coming months. It is estimated that 4.6 million children are living in poverty which is set to increase if the governments obvious failings continue.

MP’s voting against providing a free meal to children during the half term holidays added insult to injury for so many families already struggling to make ends meet.  Those that voted to let our children starve must be held accountable.

In constituencies throughout England, Scotland and Wales activists sought new ways to be heard despite current restrictions being an obstacle.

Peoples Assembly and activists came up with a hard hitting ‘empty plates’ campaign that directly targeted the MP offices of those who voted to let our children go hungry.

Calling for free school meals and ending holiday hunger, hundreds of activists started the targeting offices of MPs, laying hundreds of empty plates with powerful messages of the untold damage they are doing to our children.

Messages such as ‘Starve a kid to save a quid’, ‘free school meals not tory banquets’ and simply ‘end child hunger. 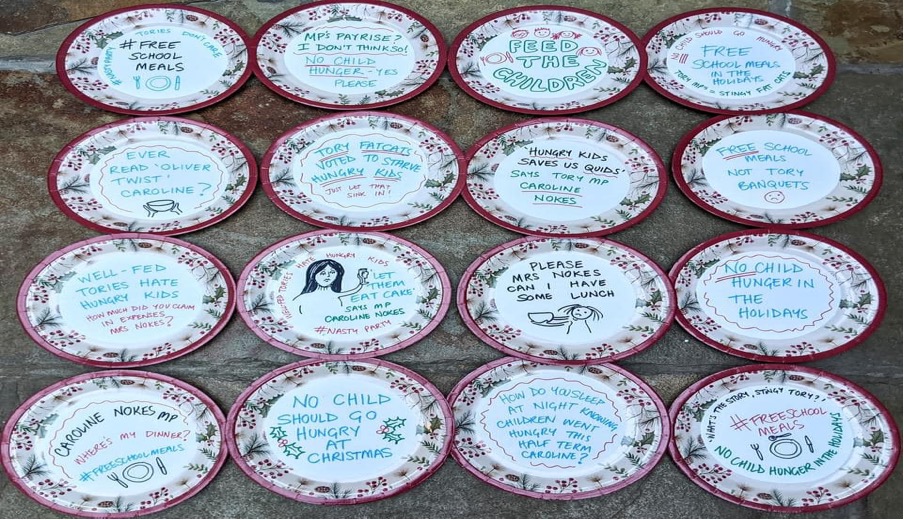 Local and national press reported widely on the protests, it is evident that this is an issue that has really got people fired up and angry.

An organizer speaking from the Wrexham protest said, “Our MP voted for children to go hungry, this is not politics, it is humanity”.

There has been an amazing amount of support for this action carried out by people in communities that want to make it clear that we won’t pay for the crisis, and neither will our children.

It has been extremely challenging organising protest and activity to fight this austerity driven Tory government and we are very limited in what we can ‘physically’ do in these uncertain times. But we will continue in any way we can. It is amazing to see all the hard work, artistic creation, and dedication of so many activists during the pandemic. We will all be back out on the streets as soon as it is safe, until then we will continue to think of creative and safe ways to make our message heard, why don’t you Join us…