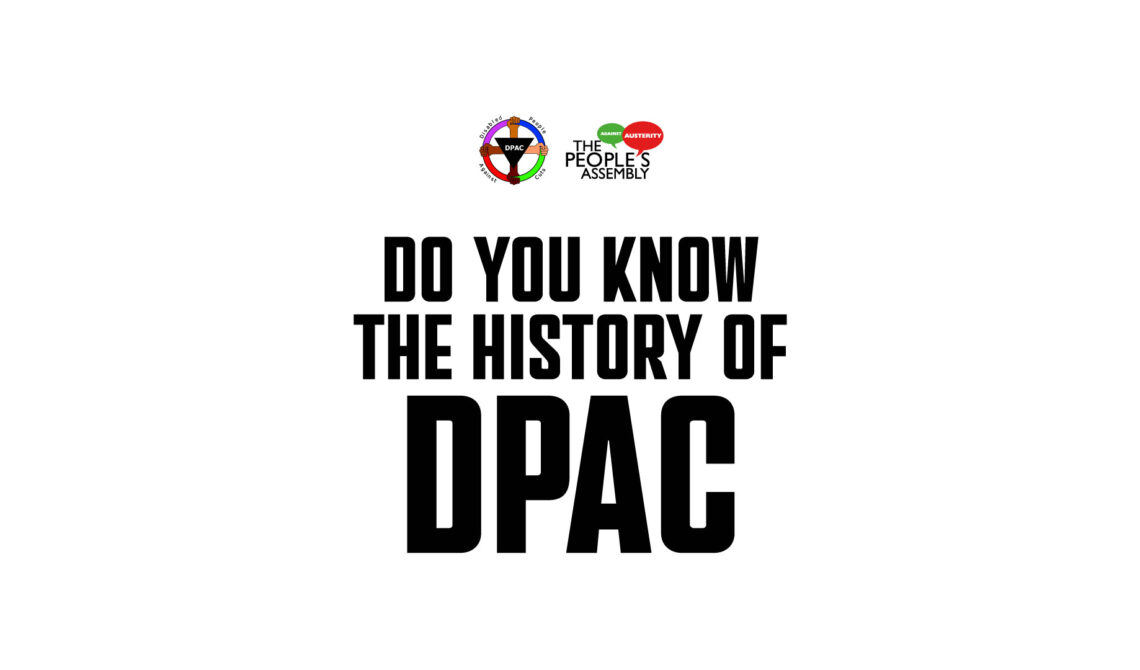 Do you know the history of DPAC?

Disabled People Against Cuts (DPAC) was formed from a protest organised outside the Tory party conference in September 2010.

As co-founder Linda Burnip tells it:

“Way back in June 2010 I was a trustee of a Disabled People’s Organisation (DPO) in the Midlands and had recently spent a weekend in a plush hotel doing a course on the UN Convention on the Rights of People with Disabilities and then I listened to George Osborne’s budget outlining cuts he planned to impose on disabled people in the UK. So it seemed to me that rather than sitting in a plush hotel talking about our rights we should instead be out fighting to keep them. I emailed all of the people who had been on the course and asked them to join me in organising a disabled people’s section in the march that was being planned in Birmingham during the Tory Party Conference in October. Thus, Disabled People’s Protest.”

Taking part in that march was not straight forward as the police and council wanted to exclude disabled people from the march due to ‘vulnerabilities’. In order to be allowed to take part we had to get DPOs from around the world to write and complain.

Following on from a successful march in the pouring rain which attracted over 100 disabled people from across the country, DPAC was formed to continue to fight for disabled peoples’ human rights and against the endless cuts.

It quickly became apparent after the Tories were elected in 2010 that not only were austerity cuts a purely ideological attack against disabled people but that we lacked a viable national DPO which would fight against them. Over the New Labour years DPOs lost their campaigning voice as they became more focused on contracts to run services and were then unable to speak out.
The austerity measures need to be seen in a wider historical context. Disabled people are an easy target because society has accepted the view that generally speaking disabled people are unable to fully participate within society due solely to our impairments. This view, supported through negative and pejorative stereotyping, distorts who we are and is the cause of the disabling barriers we face. Inappropriate and misleading labels such as “the disabled” or “vulnerable adults or children” reinforce prejudices and discrimination.

Disabled people are not “the disabled” – we are a diverse social group of people with a variety of impairments who continue to face unequal and differential treatment resulting from systems, structures and cultures which fail to take disabled people into account. Disabled people are not, therefore, simply subjected to disablist language and imagery but also to combined forms of inequality and oppressive representation across the equality strands.
DPAC was set up as a non-violent direct action group. We use direct action as a way to raise the profile of our campaigns, and also a way to make otherwise invisible disabled people visible to policy makers and the public. Direct Action is also very empowering for those who otherwise often have little control over their lives. Nationally we have stormed Parliament several times, blocked Westminster Bridge, Trafalgar Square roads, Oxford Street and attempted to occupy Westminster Abbey amongst other activities.

We also campaign in more traditional ways such as lobbying MPs, launching new campaign strategies in parliament, using social media and press, and aim though all of our work for systemic change. We have no formal funding and are all volunteers with no full-time paid staff.

Unlike the disabled people’s movement of the 1990s we are not isolationist as we locate the disabling and oppression of disabled people firmly within the neo-liberal capitalist agenda so we recognise that other marginalised groups share some of the same problems and that together we are stronger. Also, disability crosses every other equality strand so many people experience more than one oppression.

Our lives are simply not seen as having equal value to non-disabled people able to work to make profits for others. Instead we are scapegoated as scroungers and shirkers. Nowhere is this attitude more apparent than in situations where people have mental health conditions because Tory politicians and their lackies at the Department for Work and Pensions have decided they could easily pull themselves together and go to work. Work in low paid jobs with dreadful conditions is presented by the DWP as a health outcome to be aimed for even though research shows that insecure low autonomy work is worse for people’s mental health than unemployment.

One main area we have campaigned around is protecting the right of disabled people to live independently in the community with the right levels of support in place to allow them to not only be able to take an active part in society but to have access to the types of activities others take for granted such as visits to parks, the countryside and beaches, or even just the local shops. Many disabled people with inadequate levels of care provision are left alone for hours with nothing more meaningful to do then to watch television.

Some do not even have the support they need to go to the toilet and are instead reliant on incontinence pads even though they are not incontinent. This we view as nothing short of a disgrace and abuse of human rights. As I’m sure people can imagine being left in such conditions and unable to leave your home when you would like to has a severely detrimental effect on both mental and physical wellbeing.

There has been so much for disabled people to campaign against over the past decade. The problems with welfare reform and austerity are worse than ever but there is so much we still need to fight for.